After watching Everest this weekend, and reading the books about the 1996 events, I was wondering just one question. Why would you not carry 3 or 4 bottles of O's to get you up and back? Or why would a Leader such as Hall or Fisher not had enough carried up in reserve. Granted the ropes were not fixed, but with the amount of traffic that year, log jams were going to happen. From what I've read in both books on the subject, it appears safety went out the window in the attempt to put as many on top as possible.

The first reason is weight, you can hardly carry yourself up Everest let alone extra oxygen bottles, in fact as soon as they empty a bottle a lot of people drop it on the ground as litter because they can't be bothered to carry the extra weight any more. Weight is the number one reason garbage gets left on everest, because people either won't or literally can't carry it out under their own power. It's for this reason that bodies are left on Everest, because it is physically impossible to carry them off. Most just get pushed over the edge of a cliff, or left on the side of the trail as milestones to the top (Google "Green boots, Everest") There are regular expeditions on Everest where they send people to do nothing but pick up garbage and pack it off the mountain, most bodies are left behind though. See www.savingmounteverest.org. 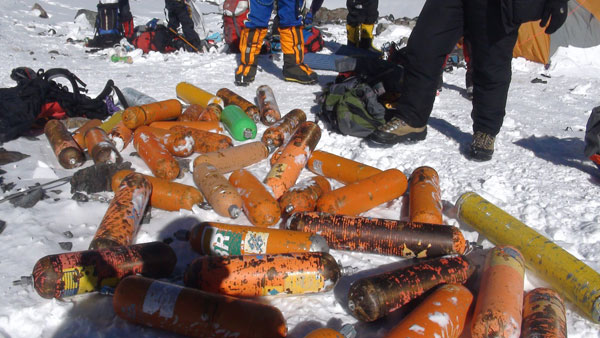 The second reason is cost, one bottle of oxygen that may last you a couple of hours costs over $500 USD, that covers not only the cost of the bottle, but also the cost of getting it up the mountain. Oxygen bottles are typically carried by sherpas to the upper camps where climbers will pick them up to use on summit day.

Not the answer you're looking for? Browse other questions tagged mount-everest or ask your own question.

13
Acquiring a Camp Site at the Everest Base Camp
14
Using the Yosemite Decimal System, how difficult is Everest?
10
Fitness for hiking to Everest base camp
19
What easy 6,500m peaks would serve as easy qualifiers for Everest?
15
What happens when someone dies on Mount Everest?
10
Can you get burned by boiling water on everest?
11
Can you boil water on top of Everest?
31
Are corpses on Mount Everest used as way-points?
4
What consequences would someone face who attempted to summit Everest on their own?