I hope the bear experts on the site can shed light on several aspects of a black bear encounter my husband and I had some years ago in the Sierra.

It was mid-May, about 9500 feet, well above timber line, and the ground was almost completely covered with snow, except for a few bare patches. I concluded: "No bear in his right mind would be here." So we did not bury our food in a snowbank. Mistake. Big Mistake.

Shortly after we fell asleep, we were wakened by banging pots. A bear walked across the campsite, grabbed my pack, which contained all our freeze-dried food, in her teeth and disappeared into the darkness. My husband tracked her by flashlight and moonlight -- the dragging pack left a clear path. Soon I heard snarls and growls, and went off to rescue my husband.

I came upon my husband, a bear and her yearling cub. Here is where I would like your input. It seemed to us both, and I can't tell you why, body language, I suppose, plus something in the snarling, that the cub was saying "Let me at him!" and the mother was saying "Be quiet! I'll handle this!" We froze. After what seemed like a long time, the mother and cub turned and went off. Q1: Is this interpretation plausible, or are we just anthropomorphizing?

The two bears had ripped open my pack, pulled out stuff, zeroed in on the freeze-dried food, eviscerated five packages of freeze-dried food and had eaten it all. Q2: When the food reconstituted in their stomachs, did they get stomach aches, or are their stomachs large enough so the expanding food was no problem?

The bears stopped at a layer of very dirty clothes near the bottom of my pack, and so missed the last package of freeze-dried food, which was a reserve. Q3: Is it plausible that dirty, smelly clothes repelled the bears? It could have been that my husband interrupted them, but I'd like to think the smelly clothes stopped them.

We hiked out for two days on one pkg of FD food and tea. The sugar and all the fresh food were gone. A great experience!

Clarification: There were no established bear boxes -- we were far off trail. This was before the era of portable bear canisters -- or at least before it was common to use them; in any case, they aren't practical for a 14 day trip, which this was. We should have buried our food in a snow-bank; it was a big mistake not to. We have used the snow bank strategy successfully many times; once we saw bear paw-prints going right over our snow-covered cache. For Sierra black bears, the snow bank trick works. We have no experience with brown bears.

I'm from bear country. I've had multiple bear encounters this year and the bears have been really bad this season. We had 4 maulings inside a month this summer.

In answer to your questions:

A1: The Mother bear is going to stay between you and her cub. This includes keeping her cub away from you as much as keeping you away from her cub.

A2: Freeze dried food doesn't expand. One of the qualities of freeze-drying food is that it maintains its size and shape, so it takes up roughly the same amount of volume even after it's re-hydrated. The bear would likely have gotten thirsty though, and drank more water to compensate for what's being absorbed by the food in order to maintain proper digestion, but I don't think the bear is going to suffer. Bears can eat a lot, especially when it's spring and they're hungry from sleeping all winter.

A3: Dirty human smell is usually one of the top deterrents for bears. I guarantee they smelt your stinky clothes long before they smelt the freeze-dried food in your bag. These bears were hungry, and knew what they were looking for, and they knew you had it. You can't disguise smells from bears; their sense of smell is literally over 2000 times more sensitive than humans. The best you can do is to merely reduce the amount of smell coming from your food bag by storing it in odour-proof bags. But these only decrease the distance from which the bear can smell your food; I doubt there's anything a bear can't smell through if you let it stick its nose up to it.

Your first mistake was assuming that bears wouldn't be in bear country. Bears are always in bear country; even in the very middle of winter bears will still get up and look for food if they're hungry, especially if they weren't able to pack on enough fat before winter. Contrary to popular belief, bears do not hybernate, they go into a deep sleep called torpor. One problem we're likely going to have this winter due to the droughts and poor berry crop is a lot of hungry bears up and about in the middle of winter looking for food because they weren't able to pack on enough fat to last them until spring.

Your second mistake would have been assuming bears can't find buried food. It likely wouldn't have taken them any longer to find where you'd buried your cache as it did for them to find your camp. In the desert, if there's no where to hang a cache, then you need to carry bear-resistant canisters to store your food in. 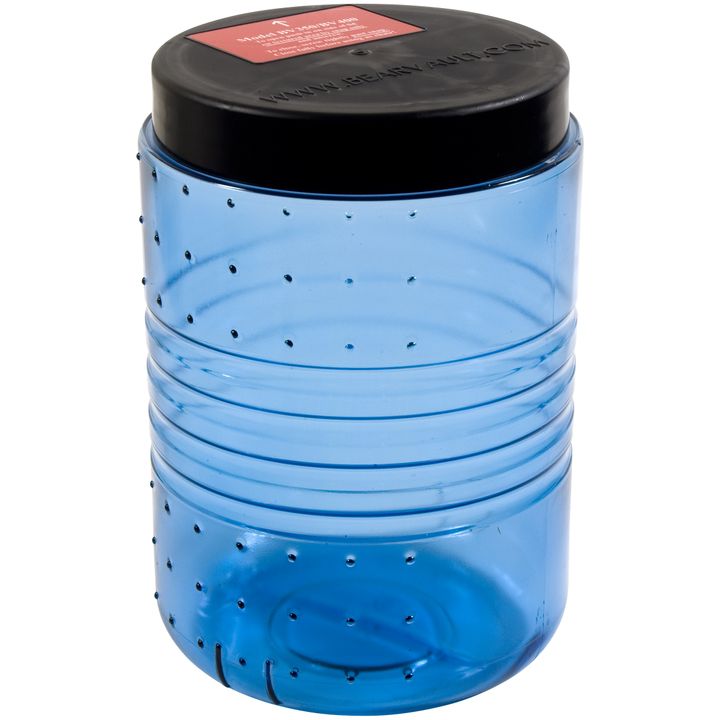 Your third mistake was chasing the bear down! The bear had what it wanted; you should have just let it go and hiked off in the opposite direction! Chasing down a hungry bear with a cub is asking for trouble; you are very lucky that you didn't get mauled and stranded a two days walk out in the wilderness with no food and life threatening injuries. Your husband took and extreme risk going after that bear alone in the dark!

Is this interpretation plausible, or are we just anthropomorphizing?

The bear cub was likely scared and its reaction was to put on an aggressive act. TBH I think you were lucky as a threatened mother bear corned with its cub in the dark like that could have easily charged you.

The mother was likely trying to decide if it could get away without getting into a fight or whether it needed to attack you. You're likely anthropomorphizing its body language as passive, but I would imagine it was very tense and wanting to protect its cub.

When the food reconstituted in their stomachs, did they get stomach aches, or are their stomachs large enough so the expanding food was no problem?

Bears are omnivores and can eat pretty much anything that a human can (and plenty of extras). So the food itself was likely not an issue. A nursing mother will have a huge appetite and will eat many times the amount that a human can in a day. So I doubt it was too much food.

Is it plausible that dirty, smelly clothes repelled the bears?

Depends. How used was the bear to humans? Bears who don't encounter humans often will actively avoid them (seeing them, correctly, as predators). Bears close to towns in busy areas, etc. see humans as walking food dispensers and lose their natural fear of humans. These are the ones that get killed or taken far away.

It's always best to not feed bears. They should have a healthy fear of humans. It prevents conflict at a later date.

You should have had your food in a bear locker. Feeding bears is never a good thing even if done by accident. You're teaching the bear bad habits that may one day get it killed (or get it into a situation where it puts someone else in danger).

7
Should food be in a bear bag/canister even when I'm hiking?
16
Do kevlar sacks work against bears?
9
Is any subspecies of black bear more -- or less -- aggressive than another?
11
Proper food storage against black bears on a LONG (e.g., 14 days) trip, partly in black bear country? (enough bear canisters not practical)
4
Remaining impacts from the very low snow pack of 2014-2015 in the Western Sierra and extra precautions we should take to minimize our impact
7
At what age do black bear cubs have a good chance of surviving on their own?
5
Is it likely that decimation of its suburban forest habitat would cause a black bear to wander into a busy city if it wouldn't otherwise go there?
1
Is there any evidence that black bears (or other large predators) are indifferent to, or acutally repulsed by, the scent of humans?
2
How to deal with changing clothing which was used while cooking as not to attract a bears?
2
Is there any evidence that bears use (or used) cub labor to get food from backpackers?