Is there a mesh mini-tent on the market that covers head, shoulders and arms, allowing you read comfortably in buggy terrain?

I like to read for a couple of hours after getting into my sleeping bag, and I don't like to use the tent unless the weather is bad. So usually I am lying propped up against my pack (food removed) attended by a circle of no-see-ums or mosquitoes trying to dive-bomb under my hat, the brim of which is sprayed with deet. Tolerable, but not ideal. A head and shoulders mesh mini-tent would protect me when reading and allow me to commune with the stars. Does such a product exist?

There exit various kinds of head or even upper body mosquito nets. You can put one over your head and the sleeping bag opening to hold them away.

If you are anyway carrying a tent, I think this is optimal as it is very lightweight. As you seem to enjoy sleeping in the open, an alternative would be to ditch your tent entirely and go for a bivy bag, with possible additional bug protection as shown in Liam's answer. 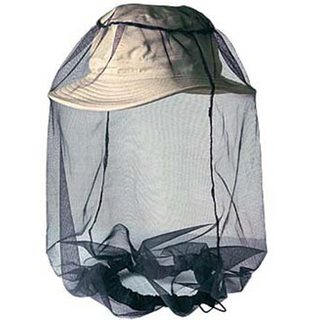 Yes, you want one of those hats with an extra long mosquito net around it: 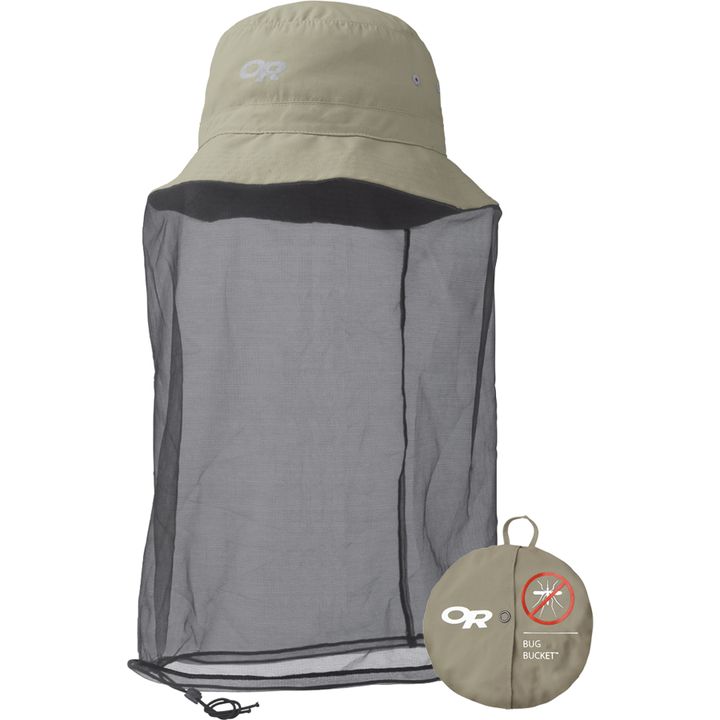 Larger ones than the one in the photo exist.

In places like northern Finland in summer, you pretty much never see anyone fishing without one. I've seen people with such nets hanging from their hat, while the net reached down to their knees. Fishing is a worst-case-scenario because people stand still by often standing water. Hikers move and those mosquitoes are very slow, so it's less urgent for them. In Sweden and Finland at least, the most advanced mosquito nets will therefore be found in shops selling fishing gear rather than regular outdoor stores.

Yes, your talking about a bivvy bag 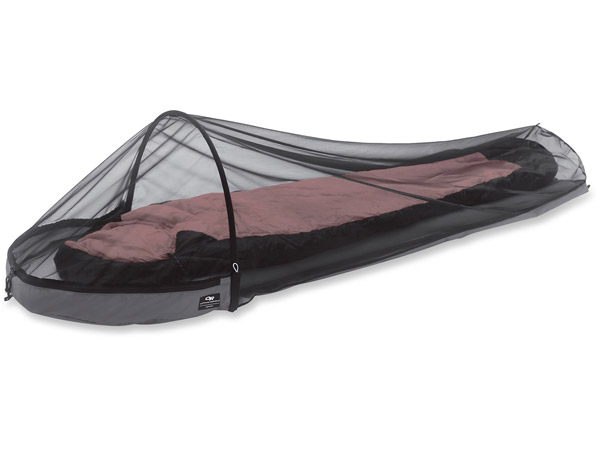 In country plagued by mosquitoes, no-see-ums, black-flies, and other blood-sucking bugs, people MUST live within "bubbles" of fine-mesh net.

The bloodsucking insects are so annoying that they regularly drive stalwart indigenous animals such as moose and bears MAD with pain, leading the animals to charge bellowing madly through the bush.

The only ways indigenous peoples were able to cope with the vermin was to liberally coat exposed skin with animal or vegetable greases which were sometimes mixed with animal musks or herb decoctions unpleasant to insects. The effectiveness of these treatments comes from the insects' dislike to land on grease, because they may be unable to fly away. The mosquito-mesh coverings are effective only because they keep bugs away from the wearer. The insects will still be attracted to the carbon-dioxide people exhale, and the warmth of human skin. If we sleep under a mosquito net, we must always make sure that the netting is tucked under the mattress, that the entry-way is securely tied, and that we don't allow our limbs to contact the netting while we sleep. If an arm or leg touches the netting, the insects will simply suck blood through the openings in the mesh. They may not be able to get into the net-enclosure with you, but if "you go to them," they'll waste no time in drinking your blood! This is why any portable enclosure has to have some kind of frame. Whether the frame is made of wire, bamboo, wicker, or some other material doesn't matter: The frame is there to hold the net away from the wearer's body, all around. And since a mosquito can drink your blood even through a light "summer-weight fabric" shirt, that means the net covering will have to go around the outside of whatever you sit or lean upon!

That means it's virtually impossible, in all practical terms, to devise a portable mosquito-proof net. There are fanciful sketches of mosquito-bars imagined for 1890s woods-wear, with large numbers of hoops holding the net away from the tender flesh of the vacationers. The factors shared by these schemes is that they are all hopelessly complicated. Wearing a mosquito net over the crown of a boonie-hat, with all extra netting tucked under the collar of a bush-jacket, by itself, is plenty annoying! After a couple weeks of wearing head-nets (when repellent supplies had been exhausted) I was ready to try an old "Jack-Pine Savage's" home-made "receipt" for bug-repellent; or as they called it then: "Punkie Dope!"

If memory serves, the "lotion" took three ounces of pine tar, combined with two ounces of castor oil and one ounce of pennyroyal oil, simmered together until thoroughly blended. This was applied to the skin, liberally and often. Pennyroyal oil is the active ingredient. How often was the stuff reapplied? "As often as the punkies became pressing with their attentions," said one set of directions! Men were to apply this concoction thickly, often, and to never wash it off until all danger was past.

So there it is. It's grossly impractical to always wear a "net-bubble," let alone rely on such to remain bite-free. Anyone terrified of "wearing chemicals" is therefore out of luck.

As for chemical "banes," many people reject them out of hand; even though many will wear cosmetics with similar plant or chemical origins.

After "painting one-self into a corner, in this manner," The only option remaining is to avoid areas where biting insects live.

Not the answer you're looking for? Browse other questions tagged camping bugs or ask your own question.

30
What's the difference between a 2, 3, 4, and 5 season tent?
15
How do you dry wet socks when camping/backpacking if it's raining and the socks cannot be hung to dry outside
9
Do you footprint the inside of your tent, outside, or both?
3
Would gutters in an impermeable single-wall tent drain condensed water away, and keep the tent comfortable?
9
Are there any areas in Southeast Asia where it would be safe to wild-camp with a tent in the mountains?
8
Is there a fuel cell that would be clean and quiet enough for RV/Camper/Trailer use?
11
How do you safely and legally dispose of old, damaged/unsafe camp stove gas canisters that are still full?
8
How to design a semi-permanent campsite for short trips into the woods that won't attract vandals when we're not there?
5
What foods attract mosquitoes to your body, and what can you eat that will repel them?
0
Camping: how to put sleeping mats in a tent that tapers at the feet end?