Effective way to carry a sleeping mattress with rucksack?

I am going for four day hike in Western Ghats. The terrain is rocky humid and It is one of the eight "hottest hotspots" of biological diversity in the world.

I am trying to pack my rucksack as per the terrain and found that sleeping mattress is a most important thing while hiking in this type of terrain. 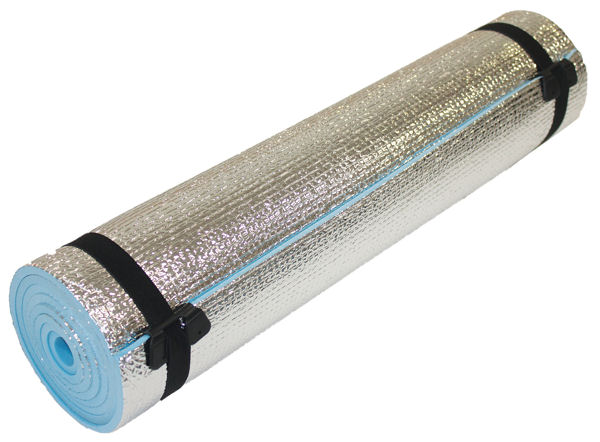 This is my first time using sleeping mattress in a hike. I am confused how to carry a mattress with rucksack.

I found some possible ways of carrying sleeping mattresses with rucksack. like following. 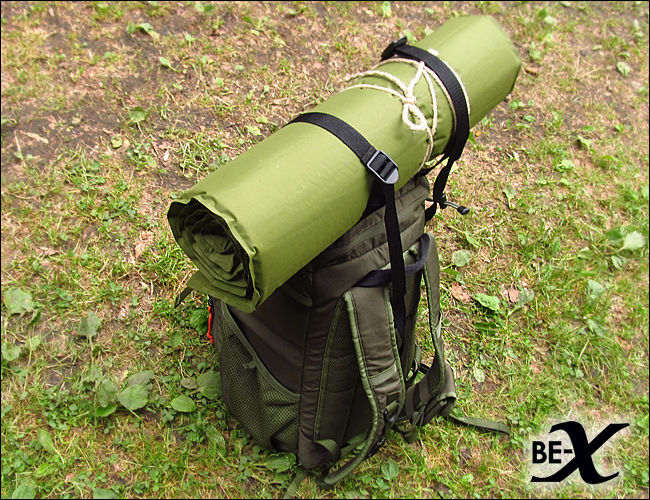 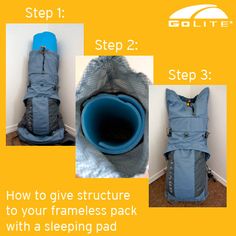 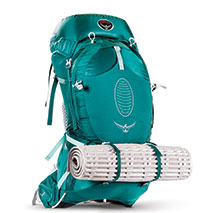 I think it is best to avoid attaching anything to the outside of a rucksack; items attached to the outside are more likely to get wet, damaged or lost. You must also be careful not to overbalance your bag as this will cause unnecessary back strain.

What is the best effective way to carry a sleeping mattress?

I think having it vertically using side compression straps or bungees on the rear of the bag effects movement the least (ie not getting caught on stuff). As Kate Gregory mentions the pads are really light and don't affect the balance of the bag too much so I wouldn't worry about that. foam pads like the one you have are also really tough! Unlike an inflatable it doesn't really matter if it gets a hole or tear. 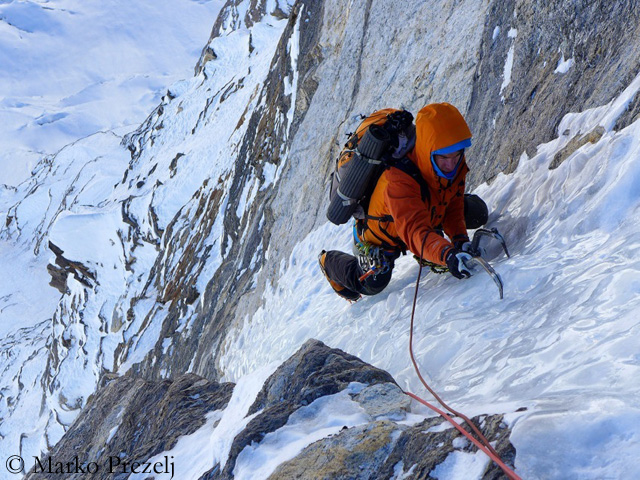 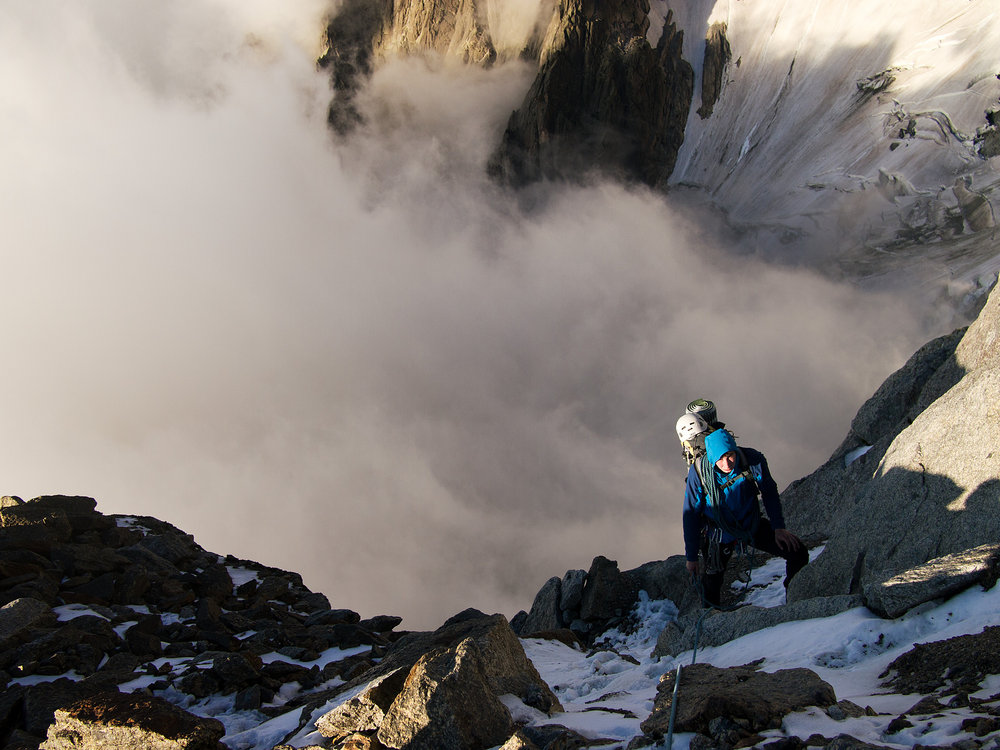 Another alternative is to chop your sleeping-mat up into panels that fit against the back of your bag and create hinges using gaffer tape. many people use this to replace existing back supports in bags so the pad will serve two purposes. The down side is you are unlikely to get the whole mat in and retain a usable volume for your other gear so will have to decide between a long very thin mat that covers the whole body or a shorter wider mat that just covers the torso (put your legs on your bag)

The decision is normally determined by the trip you are making. How much extra stuff do you need to put in the bag? How likely will a mat on the outside of your bag get caught on things. What do you consider to be uncomfortable?

A slight aside is that its worth having one back panel of foam in your bag at all times even if you have no intention of camping out. Its great for sitting on when you stop to rest or eat and can prove extremely important for insulation if someone is injured and may need to remain immobile for a long period of time while you sort-out help.

A rolled up sleeping pad is generally pretty lightweight, meaning the "you could misbalance your pack and strain your back" concern is probably one you can ignore. People try not put them inside because they may not fit, or they may get squashed. If the pads are waterproof, which is common, you really don't need to worry about the pad getting wet from carrying it outside the pack.

In the end you need to balance your desire to have everything inside the pack with the size of pack you're willing to carry and what else you're going to bring. When I canoe camp, I take large bags called Duluth packs, and putting my mattress in there vertically is simple enough. People who are hiking, carrying everything all the time, generally carry smaller more structured packs and put mattresses outside on the top, as in your first picture, or the bottom, as in your third picture, centred so as not to throw off your balance. (The choice often depends on the availability of straps on your pack, or whether you can still get into at least one pocket with the mattress attached.)

Are you going to be walking through dense foliage? If so, there is a chance a mattress attached like that would catch on branches and be damaged or pulled off. This would tip the balance more to the "inside the pack" decision. If not, then outside can be a perfectly sensible choice.

I switched to using a self inflating mattress years ago, mostly because of the problem of the bulk of foam mats, and having them outside the pack while working though dense bush.

Inside as shown is really not useful. The mat does not conform to the contours of the pack pack, leaving very little space for your gear. If you have space inside your pack, role the mat normally and pack around it (I have done this for short trips, but prefer a smaller pack with the role outside over a larger pack).

What I found is the mounting low down and across (as in your third picture) works very well most of the time, and was my usual carry position. When in very dense bush it can get caught up easily. In many cases it prevented me getting between trees and often caught on vines. In these cases I would switch the mounting to having it vertical up the center line of the pack, then it would get caught at the top.

One trick is to ask if you need it full width - I had mates who had trimmed their mats down so it was no wider than the pack. Also, shortening it to a three quarter length will mean it has less volume, but provide nearly as much warmth as a full length mat.

Edit: Another condition to be wary off is (very) high wind. A Vertical and to some extent top mount acts as a sail and you are more likely to be blown off balance - switching to bottom horizontal mount is definitely worth while. switching.

I tend to attach the sleeping mattress to the bottom of my backpack so that my backpack can stand upright without extra support. Highly convenient. 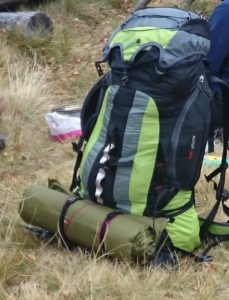 I prefer the mat (in the rare case of sleeping outside in winter, mats) rolled up inside the rucksack, against its wall, as shown in the middle picture in your question. This way the mat is safe (possibly the least concern, as others described), and it does not protrude in any direction, which is quite useful is certain types of terrain (like getting through bushes).

Of course, this uses up some space inside, so you need a big enough rucksack (or carry less stuff). Also, pulling the mat out is easy, but for putting it back you normally need to first pull out quite some stuff, too.

It actually depends where you hike, the type and size of your backpack, the type of sleeping pad and how much you carry in your pack. I use a Mountain Smith Mayhem 45lt which is a top loading and also can be accessed from the back. It has an internal frame. Putting the sleeping pad inside lined around the pack will not enable me to access quickly to the things inside. My sleeping pad is Thermarest Solo Z lite which is foldable and does not take to being rolled up kindly. With my tent, ground sheet, tarp, sleeping bag, cook system, a pair of cloths, towel, food, survival kit, first aid kit, water bladder, knife, laplander saw, cordage, and lamps, I think that's about it. I hike on trails and my pad/mat has never once been caught in branches or threw me off balance. The thermarest Solo z lite is really lite and waterproof.. even if it gets wet, a simple wipe will ensure its dry. So far so good. I would hate to have to buy a bigger pack as it would mean bringing more stuff.

Not the answer you're looking for? Browse other questions tagged hiking backpacking wild-camping preparation western-ghats or ask your own question.

5
What to do if you cross paths with a buck?
13
Tips for travelling through Europe with just a tent
14
Planning a Trip with strangers
15
What's the best way to store/carry olive oil for hiking?
12
What is the best way to manage Scottish midges?
6
What's the difference between defined Forest areas and laws with respect to hiking/camping through them in India?
45
Given limited space and weight what should I carry to get a fire going with damp wood?
6
What is an efficient and effective way to test an emergency day-hike kit?
73
Sleeping solo in a double sleeping bag