How to react to an aggressive boar

As far as I know, boars are pretty aggressive when they have piglets. In the appropriate season, one might happen to hike into the path of an overprotective mother and get attacked.

How do I react to an aggressive boar? Are there any warnings or do they just instantly rush towards you?

Loosely related: What are the odds that I stand a chance against Wild Boars?

First of all we should consider what threats may apply:

I think it's especially interesting that a boar can harm you more than just with its direct physical charges. 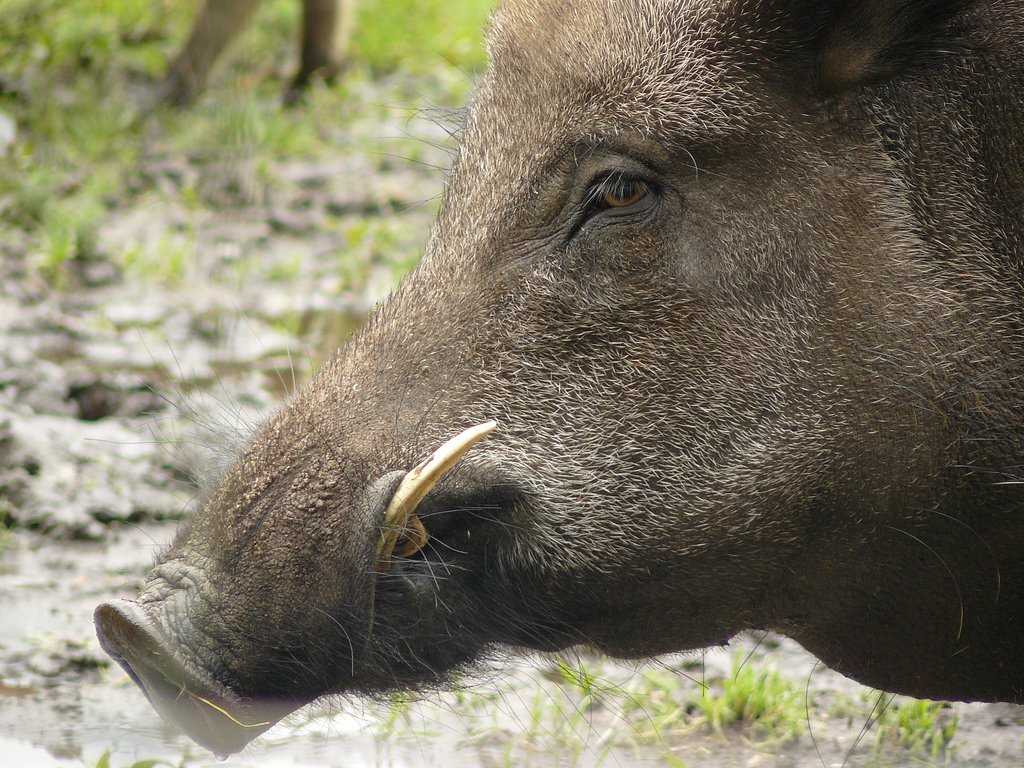 Friends of the boar have summarized how an encounter might look like from the beginning. I want to show of the warn signs which should ring your bells to prevent an actual charge.

(If you see a group of boars,) at least one of the boars will become more active now, usually a juvenile, and will walk towards you, maybe a little nervous, sometimes turning round to return to the others. The move towards you is for a better look, for they have very poor eyesight. Others may soon join in. It may take just a few seconds for this to happen.

Now, this is not aggression. They are not ganging up on you, but are being brave and facing their potential threat. They are like children now, excited and about to be proud of warning mum that they have spotted you. Mum may now join in, sniffing you and deciding whether to walk or run away. If she decides to run, she will belt out a loud grunt or snort, and turn tail. At this moment, all the younger boar will also flee at high speed away from you. It's all rush and noise, and you hear feet stampeding away. That's usually it.

Mum may stop shortly afterwards and take another look at you, maybe even walk back towards you. Again, this is not aggression. She is saying to you, "You saw how fast we are so don't bother following." She will either stay and start feeding again, or if you move towards her in the hope of a photo, she will grunt again and run.

How does a boar behave if push comes to shove?

Friends of the boar and Wikipedia:

Even in these terrible circumstances for the boar, the boar attack is very fast and is not a charge made from many meters away. The boar are close to the aggressor, maybe just a second or two away.

Actual attacks on humans are rare, but can be serious, resulting in multiple penetrating injuries to the lower part of the body. They generally occur during the boars' rutting season from November–January, in agricultural areas bordering forests or on paths leading through forests. The animal typically attacks by charging and pointing its tusks towards the intended victim, with most injuries occurring on the thigh region. Once the initial attack is over, the boar steps back, takes position and attacks again if the victim is still moving, only ending once the victim is completely incapacitated.

Also be aware that there might be a different "charge style":

A female bites you. Her head doesn't lower. Instead, look for her shackles on the shoulders to rise and maybe her tail stand erect. She will also growl.

A boar doesn't charge instantly. It gives you warnings (a lot of them actually - see the previous section). I know, the question is more about the point where it's already too late, but it's worth to mention how you can prevent a charge in the first place.

(If a) boar may walk straight at you (...), stand tall and shout at (it). Move towards (it) confidently but not aggressively, and (it) will probably move out of your way.

If (it) follows you don't panic but keep walking away - (it) will soon get fed up. Just be confident, if (it) is tame she will not hurt you.

Nearly the same thing applies to react to a the described "bite attack". If ever you see these signs, move away confidently, reassuring her with soft words rather than screams or shouts.

You may sometimes hear a growl from scrub where she is hiding with her piglets. If you ever hear growling in the scrub, don't wait to see her, go back immediately from where you came.

You should take these actions to defend yourself:

How to Survive if Threatened:

See backcountryattitude.com/wild-pigs.html for wild pig attack and what to do. It's too long for me to summarize -- as a hunter, you would find it easier to summarize it as an Answer than I would.

As the victims of boar attack are usually recovered from dense forest areas, the investigating officers could be misled as to the nature of infliction of these multiple, fatal penetrating injuries to a possible homicide. Unlike the injuries inflicted by wild cats, canines and bulls, the hallmark of boar attack is the infliction of multiple penetrating injuries to the lower part of the body. This case is reported for its rarity, for the awareness of the possible injuries in such unnatural deaths, and for the factors predisposing to a boar attack.

Lower extremity lacerations of up to 10 cm in length and 4 cm deep were seen in the 3 cases reviewed.

I’m all for carrying a 357 magnum orca marlin 444 loaded with hollow points and pop a cap into them aggressive or not. Here in Florida you can’t even hike anymore with the things getting weird.By hike I mean HIKE, not little park walks ( but lately they are there as well) but long walks into the jungle. You see one kill it, you see many kill them all. They consistently ruin my lawn. Those die as well. Those with a cross bow because it’s in a neighborhood.Bottom line is just kill them if you can.

Not the answer you're looking for? Browse other questions tagged survival boars or ask your own question.

2
How to behave when there is a wild boar in your way
22
What are the odds that I stand a chance against Wild Boars?
-3
Fending off a boar with an axe?

22
What are the odds that I stand a chance against Wild Boars?
13
How to estimate the depth of a pool of water from a distance above?
9
How is the Nuaulu palm leaf carrying pot made?
10
What options are available for hunting feral boar on Hawaii?
5
How many tea light candles are needed to equal the heat output of a person?
5
Artificial reintroduction of wild animals: how frequently does it happen, and what is the purpose?
3
Is 30-06 too high caliber for hunting wild boar?
10
Is it safe spending night in wild boar territory?