Are there reasons for not putting the mileage on trail signs or is it just a matter of style?

I have seen a lot of trail signs and one thing I noticed is that sometimes they have the distance from one point to another like,

and sometimes the mileage is simply omitted. Are there reasons for this or is it simply a matter of style?

Knowing why distance was included or omitted in any particular instance requires asking the people that decided on that particular sign. In other words, in the general case, you don't know why.

I've been involved with specifying trail signs. One reason I can imagine that distances were omitted is because they weren't known with enough confidence to put them on a sign. A sign or a bunch of signs needed to get done, and nobody had time to go out and measure the trail distances. Another possibility is that whoever specified the sign just didn't feel it mattered.

I'm on the town Trails Committee, and am in the process of getting signs put up at trail intersections. This is more work and more complicated than most people would expect. We want distances for each destination, which means we have to actually know the distances first. GPS tracks can be OK, but are often not so good at measuring distance, especially when the trail is very curvy.

Before we can get signs made, I go out and get the length of every trail segment with a measuring wheel. The distances that go on the signs are often a summation of 10 or more individual trail segments. To avoid accumulating errors, I record the distance of each trail segment to 1/1000 mile. These are added up to get the distance to the destination for the trail sign, then rounded to the nearest 1/10 mile. With this process, we can be quite confident the result is accurate.

I can certainly see some organizations just skipping all that by not putting distances on signs.

I'll be giving a talk on this topic and trail mapping in general at the MA state Trails Conference later this year in November.

In Europe, especially in the mountains, trail signs usually have time instead of distance, even though the distance is probably accurately known. The mileage isn't really the most important thing as altitude change and terrain are much more important; 3 miles on a good track along a valley floor might take less than an hour, but 3 miles on a narrow, difficult path that ascends 3000ft to a Col might take several hours.

In short, distance might be misleading, so time is used as a better indicator of the commitment and effort required to reach the signposted destination. 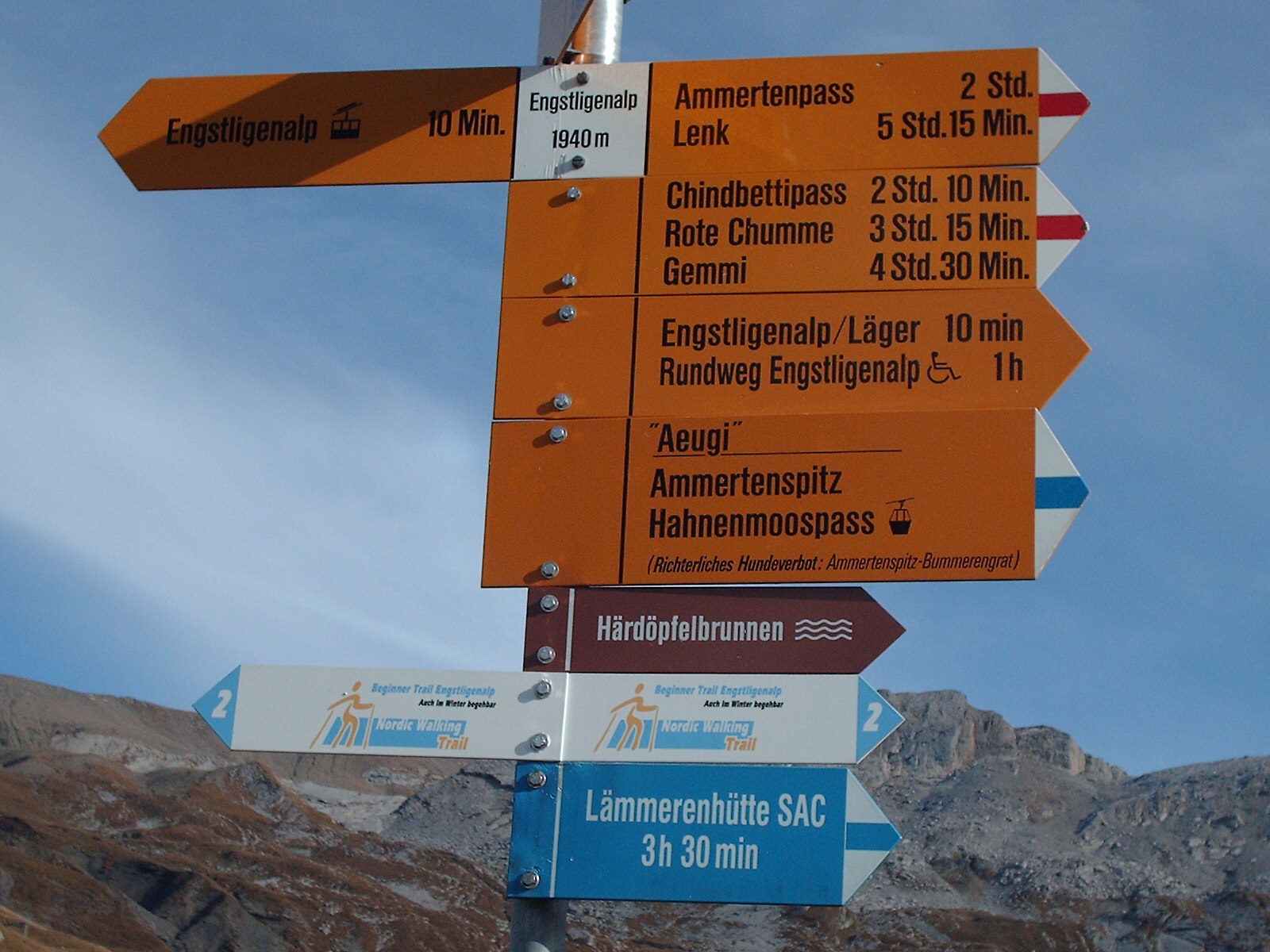 Not the answer you're looking for? Browse other questions tagged trails signage or ask your own question.

15
What are good designs for volunteer-buildable trail bridges?
34
Wood versus plastic trail signs?
8
What is the longest stretch of bike trail that parallels a navigable river in the US?
7
What are the best possible ways of indicating a 'closed' trail?
7
How are trail surface firmness and surface stability defined?
2
Hiking trails between Mt Moosilauke and Rumney NH
4
Is there a standard hiking trail difficulty rating system in the United States?
6
Can putting nails in trees cause longterm health problems for the tree?
5
What are these painted markings on trees for? (not trail markers)