Is it realistic that a duck would raise a swan?

One of the older fairy tales is The Ugly Duckling where the one oddball of the bunch is considered ugly by the other ducks but turns out to be a swan at the end of the story.

From what I have read, Canada geese can't tell the difference between real and dummy eggs (dummy eggs are used to control the population), but I highly doubt that a duck would actually raise a swan since from the research I did for this question, any unrelated ducklings will be chased off.

Is it realistic that duck would raise a swan?

As you suspected, in general it's not realistic that a duck would raise a swan, especially in the wild.

Shortly before hatching, the nearly developed embryos produce clicking and peeping sounds inside the eggs. Known as "pipping," these vocalizations help synchronize hatching among different members of the brood. The hen responds by making soft clucking sounds to her unhatched ducklings. These early communications are a crucial part of a process known as imprinting, in which the ducklings learn to recognize their mother's voice. This ensures that the brood will follow their mother when it's time to leave the nest.
Source

Even from quite early on in the incubation period, the developing embryo will be able to hear sounds inside the egg from the outside world. It is believed that the pen (female) and cob (male) make a number of sounds during the nesting period that they use to start the imprinting process of their offspring.

After the cygnet is born, the mother and father make a number of sounds the baby swans use to programme themselves to audibly recognise their parents. Each swan produces its own unique sound, rather like humans have their own unique voice. The pen has a slightly higher pitched sound than the cob.
Source

With all these factors in play, you can see why the story was just that, a story. Interestingly, I spoke at length with the Director of the Trumpeter Swan Society, a conservation organization in Minnesota. This is one of the most common questions she gets, because people who've read the book want to know if it could be true. She said she uses these calls as a way to get people excited about swans and ducks, to encourage conservation efforts.

She did say that in rare cases, but only in captivity and with a tremendous amount of work on the part of breeders or people who raise these birds, it has been successful. However, it's not the same as trying to it with chicken and geese, which can work because they're closer in physical and behavioral traits. 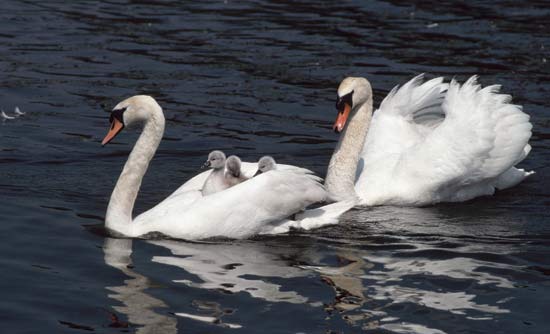 Sources for information referenced here and for additional information:

I have seen on TV ducklings being 'raised' by cats, Cuckoos being raised by small singing birds and people in zoos using birds of some breeds to brood eggs of other species.

So if a swans egg happens to be in between the eggs of a duck and she does not notice it when it is newly there, it is very likely that she will not take any action against the egg.
When the egg comes out with her there, she will accept the chick as one of hers, whatever the looks and size.

In nature it is however rather unlikely for a swans egg to get into a ducks nest. It will take some real action and neither swans nor ducks will want to move the eggs. There are animals that steal eggs, but they do that to eat them, not to store them in an other nest.

3
How do mallard mother ducks tell their ducklings from others?

12
How do I get started duck hunting?
8
What would cause sudsy surf?
9
Why would a Canada Goose sleep on a frozen pond?
8
Would a Canada Goose deliberately try to keep a section of water from freezing?
4
How do you situate a protected bird house that is not under a branch?
2
What may have happened to this duck family?
9
What type of duck is this? Seen in south-east London park
2
Why would a bird sing while still dark at the same time each night?
3
Will house finches abandon a nest that fills with snow?