How to improvise a pair of tweezers in the wild?

From slivers caused by chopping wood, thorns from plants, or bee stings there have been times when out in the woods when a pair of tweezers would come in handy and none where on hand. Are there are materials found in the outdoors that could be used to remove such foreign objects embedded in ones skin when fingernails and teeth will not do the trick?

I've used bamboo tweezers before. They're normally made by gluing two flat pieces of bamboo togther with a wedge in between, but with skill and suitable thread you could lash the blades together with a wooden wedge. They can take a surprisingly sharp point or edge, but it wears fast.

However you'd need a knife to make them. The chances are if I had a knife I'd have tweezers, given that all my penknives, even my keyring one have tweezers. I always have at least that keyring knife on me, but rarely have another sort of knife -- and if I do, I've probably got a first aid kit with tweezers!

You also need a source of bamboo, which isn't exactly common in the wild in many countries. It might be possible to use wood but you'd need one that's both reasonably hard (to get an edge) and fairly flexible. Ash might work, perhaps starting from a fork in a branch.

Edit: I've had a little play with my last suggestion of (green) ash. Starting with a fork of twigs about 8mm in diameter a few minutes of whittling gave me tweezers that were capable of picking up a single hair. They were a little stiff and in trying to make them more flexible I broke the joint, but not right through. This was actually an improvement. Not having a splinter or sting for testing, I managed to pluck a couple of hairs. The tips could do with being harder - a little heat would help and even a few hours drying made a big difference. While I used secateurs for the initial cuts (I was in my own garden) the shaping was all done using a small sheath knife. 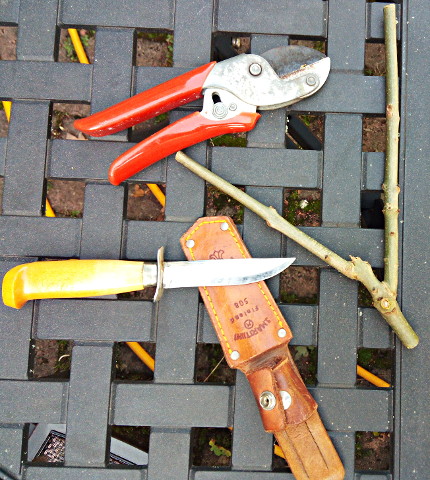 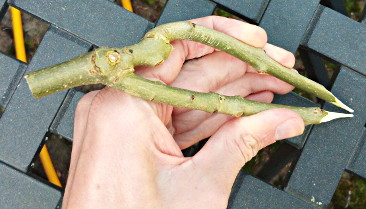 the first version, a little stiff to hold steady (with my left hand that's recovering from an injury)

The final version; after breaking the outside of one half and reshaping the tips these tweezers pluck hairs successfully. They'd certainly do thorns and would be as good as many first aid kit tweezers for splinters (which is to say not great, and not as good as Victorinox)

Thread is often used for plucking eyebrow hair - perhaps this would work on slivers too. Assuming you were clothed, you could probably get hold of some thread.

You can view a great guide with text and video at https://www.wikihow.com/Thread-Your-Eyebrows

Not the answer you're looking for? Browse other questions tagged health improvised-gear or ask your own question.

8
How do you make a stone axe?

11
How could I treat scrapes outdoors without a first aid kit?
14
How can I make/improvise a rope on a trip?
10
Is it possible to improvise a knife sharpener in the wild?
12
Is there a way to light a fire in the wild using rocks?
5
How to improvise heavy rain protection for a backpack?
16
How to find new poles for old tent?
10
How to measure the temperature without a thermometer?
8
How to protect sunglasses without a case?
8
How big a tarp for one person?