Why did Lewis and Clark use square rigged boats?

The best way to travel across wilderness with a lot of gear depends on the exact nature of the terrain; in particular, if it contains rivers, the best solution may be a boat. Lewis and Clark accordingly made use of such, as detailed in this excellent article http://www.lewis-clark.org/article/3072

One thing I notice, looking at the models of the boats involved, is that they had square rigged sails.

As I understand it, the two reasons for using square rigged sails were:

The former was obviously not the case by the time of Lewis and Clark, and the latter was very definitely not the case either; on the contrary, river travel is the scenario when you most badly need maneuverability, and I get the impression the optimal sail plan for that is the fore-and-aft a.k.a. schooner rig – is that the correct terminology?

So why would the Lewis and Clark boats have used square rig? Is there something about either that kind of travel, or the construction of small boats with hand tools, that I am missing?

From the article you've linked, they were under sail a little more than one-tenth of the time [on the river]. Perhaps that could have been a bit greater if they were schooner- or lateen-rigged, but fundamentally these boats were rowed, poled, or hauled by ropes most of the time and the sailing gear should therefore be thought of as an optional extra to some extent.

The simple mast with little rigging doesn't get in the way too much, and doesn't require too much complexity or rope in construction. It's easier for lightly-trained crew to operate. Note that the "white pirogue" mentioned in the article wasn't purely square-rigged - there's a spritsail pictured, and from the article that boat was favoured.

On a reach, a sailing boat needs a decent keel, leeboards, daggerboard or similar to resist sideways movement. In a river that may be shallow in places, this will be very vulnerable to hitting the bottom. No leeboards are pictured in the models; oars could perhaps have been used but that would occupy men.

I am no historian, and the "Red Pirogue" modal does appear to be rigged as a square sail, but it is possible that, either the modeler made a mistake, or the boat was re-rigged with something like a dipping lugsail, which looks square from a distance, but acts more like a for-and-aft sail. A quick read of some of your linked website shows the expeditions not only changed boats, but built completely new ones at various times, it would be totally plausible that the boats were re-riged one or more times over the length of the trips.

Blockquote On a reach, a sailing boat needs a decent keel, leeboards, daggerboard or similar to resist sideways movement. In a river that may be shallow in places this will be very vulnerable to hitting the bottom. No leeboards are pictured in the models; oars could perhaps have been used but that would occupy men.

a keel on a longboat of the same era, was simply a center timber sticking a few inches lower than the planking, It does not give much, if any upwind performance, but it would reach significantly more than a strait down wind barge. Its also more than possible sailing was never a priority and they just used the sails to have a rest when the wind was in the right place.

Why did Lewis and Clark use square rigged boats?

Meriwether Lewis had boats designed for his expedition that could fundamentally be used in all sorts of weather and topographical situations that would probably be encountered.

Lewis and Clark's keelboat was built as a galley in Pittsburgh in 1803 for the Lewis and Clark Expedition, after detailed specifications by Meriwether Lewis. A keelboat, it could be propelled by oars, sails, poles and towlines. The boat was the expedition's main vessel until the spring of 1805, when it was returned to Saint Louis.

In May 1803, Lewis ordered that a riverboat, built to defined specifications, be built at Pittsburgh for the expedition. When he arrived at Pittsburgh, he found that the boat builder had just begun building the boat and that it would take six weeks to finish it. This worried Lewis, who wanted to get underway in the vessel before the summer drought lowered the water level of the Ohio River, and to reach the Mississippi River before it froze in the fall. - Lewis and Clark's keelboat

Good biographies about the Lewis and Clark Expedition demonstrate that the boats employed in the expedition did in fact use many different methods to travel the various rivers encountered. They actually employed all methods mentioned in the Wikipedia article mentioned above. The keelboat was actually propelled by oars, sails, poles or towlines, at different moments due to unforeseen conditions and situations.

The square rigged thus meant that they would be able to constantly make headway in many manners of situations that arose. Buoyancy was more an issue for the expedition than speed. At times the water levels were quite low and poles were employed at the same time the sails were up!

Lewis had designed the keelboat; he supervised its construction, and probably made changes and additions during the building period. The boat was basically a galley, a vessel not like any other found west of the Appalachians, although of a standard type used on inland waters in the east. It was 55 feet long, with an eight feet beam, and with a shallow draft. The mast was 32 feet high and could be lowered. The boat could carry a headsail and a square rigged sail. A ten feet long deck at the bow made a forecastle. A raised aftercastle of the same length contained a cabin. The hold had a capacity of 12 tons. Eleven benches for the oarsmen crossed the deck in front of the aftercastle.

The keelboat could be propelled by oars, sails, poles and towlines. When using the setting poles, the crew put the poles in the bottom of the river and pushed off while walking from the bow to the stern. Towlines were used by men, horses, or oxen pulling the boat. 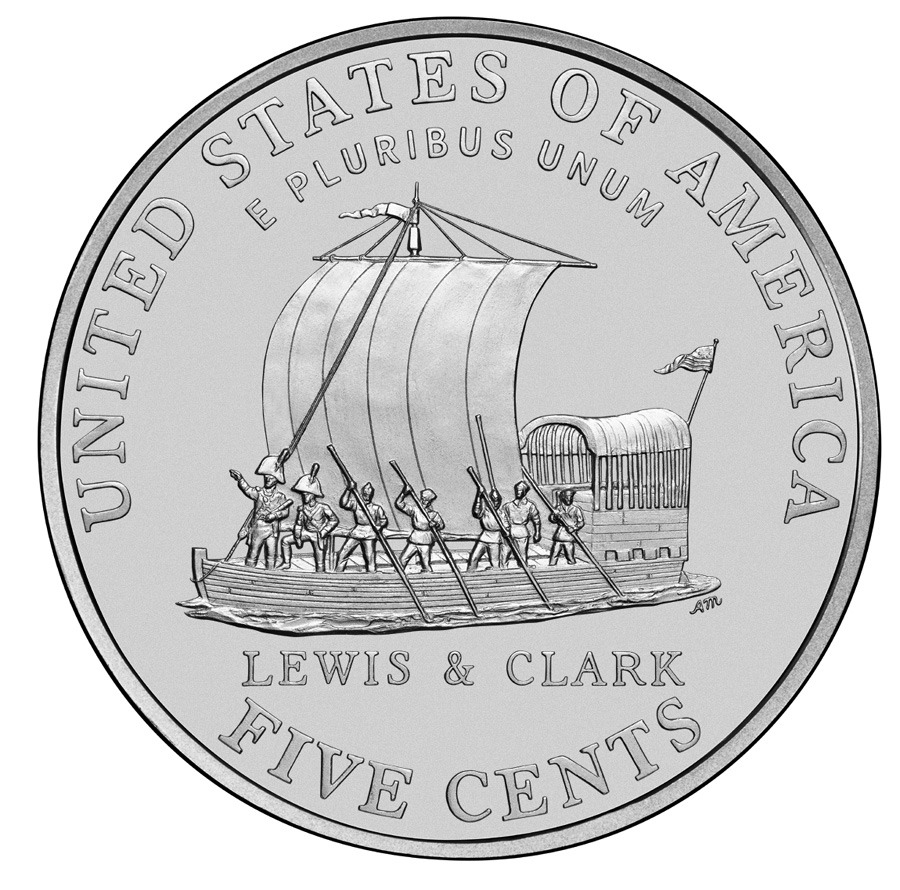 This memorial nickel shows the use of setting poles on Lewis & Clark's Keelboat.

Not the answer you're looking for? Browse other questions tagged boats sailing history or ask your own question.

4
How long does it take to sail up the Mississippi?

3
Why did they try so hard to bring the turkey to Europe?
9
Why did wetting down canvas sails increase the speed of a sailing ship?
11
When trimming my sails, why would I want them to stand flat, versus having some belly?
13
How did Viking era hikers carry their gear and provisions?
10
Do square-riggers also use 'aircraft-wing-style' propulsion?
4
When and why were House Sparrows originally brought to the United States?
15
What is a 'Whitecap' and why should I be concerned about boating in them?
6
What are the differences between boats and "ice yachts"?