Which ski binding for alpine touring?

Being a ski-novice I want to start doing alpine ski tours, that means mountaineering with ski. I don't want the ski to be mainly used in 'downhill powdering'. Because of long uphill sections, weight matters. But comfort/safety is important too because I don't wanna crush my knees on the way down hill. I also want to use the ski to approach climbs.

That being said, which type of bindings are available? What are pros/cons?

Would be nice to have some examples too. I am not looking for buying recommendations but being new to ski some examples would help a lot. For example, is the "Dynafit TLT Speed Turn" a good way to go?

There are two basic designs for bindings for ski-touring: tech/Pin bindings and frame bindings. All examples given are not a generally representative sample as they base on my experience here in Switzerland, where Diamir and Dynafit dominate the market with a recent increase in marker bindings (but mostly in freeriding). 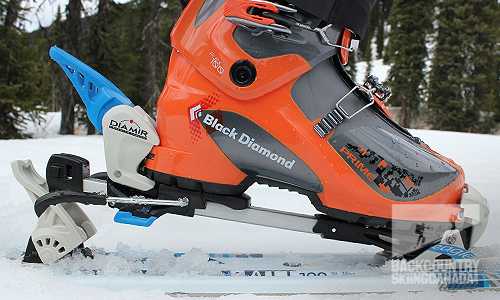 These are similar to standard alpine ski bindings. The toe and heel pieces are connected by some kind of frame. The toe piece differs from an alpine one that its height can be adjusted to touring ski boots, which have a thicker sole. On the back there is a ascension aid.

All models do not differ drastically from each other. They basically do a tradeoff between weight and walking comfort to downhill stability. Diamir covers the whole range, but is traditionally strong in backcountry segment (e.g. Eagle model). Marker started the opposite way as a pure freeride (i.e. descent centered) supplier and recently went more into backcountry. Their Marker Baron is the standard for descent oriented skier doing occasional ascents. Personally I used and still use on my "stone skis" an old Diamir Freeride binding, it never failed me ones (but its heavy, but hey: training!).

This type is uniquely designed for ski-touring originally by the company Dynafit. Luckily since quite some years their patent has expired so they are no longer overpriced and there are various companies producing such bindings. Toe and heel piece are fixed on the ski and there is (with exceptions) no connection in between. The toe part has spring loaded pins that insert into inserts in the boots on its side. Thus the boot alone can rotate around that point. For descending the heel can be fixed via another pair of bins to the heel. 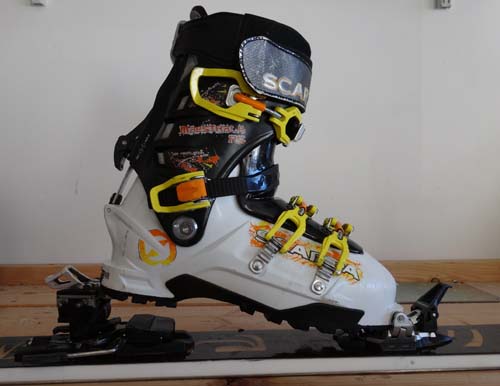 As stated for a very long time, there was only one choice here: Dynafit. As I only know their bindings from my own experience, I will explain based on their models, but it is applicable generally. Here the tradeoff is in between weight and safety. The lightest models have barely any material on the skis and are mainly intended for races, they are not recommendable for backcountry skiing. The two kinds are the standard and the "Speed" versions. The main difference is, that in standard version there are stoppers, in "Speed" versions the ski is secured by a small leash at the toe piece. So in case of ejection, the ski will stay around you with the "Speed" binding. This can cause serious injuries. In my opinion, I would always got with stoppers, there weight is really not that bad. There are also "FT" vs "ST" versions, where "FT" have a plate in between the two binding pieces, supposedly increasing stiffness. No idea whether there is a notable difference.
Since two seasons there is a pin binding from Diamir (Vipec) that has controlled ejection in the front piece in both up- and downhill mode. There were serious problems with unwanted ejection in ascent on hard snow and some problems with the step in. From what I heard this were resolved in last seasons model and I know several content users. Still this remains a niche product. When I switched to Dynafit Radical ST binding, it felt like the skis were missing. Admittedly the new skis were lighter too, but the rotation point really makes a huge difference. After some habituation to having "almost nothing" holding your boots to the skis this are now my goto bindings, I wouldn't switch for anything.

6
How do you punch out toes in ski-touring boots?
12
Beginner Ski Touring - Avalanche Terrain
6
Getting Alpine Touring (a.k.a Randonee) boots for big feet
6
Manual vs auto lock ski binding
3
How to learn ski touring
7
How does ski binding height affect skiing off-piste?
4
Are there any kid sized alpine touring ski boots and bindings?
5
Are "Dynafit"/tech ski boots compatible with frame-style touring bindings?
9
Can you "kick and glide" and climb without skins in Alpine Touring ski gear?