9mm is considered minimum for a vertical rappel with a nylon or polyester kernmantle rope, 6mm with high strength aramid, but what if your rappel isn't vertical? What's the minimum safe rope diameter for rappelling a slippery slope that may be 60° or less?

I'm asking because we plan on going here this summer: 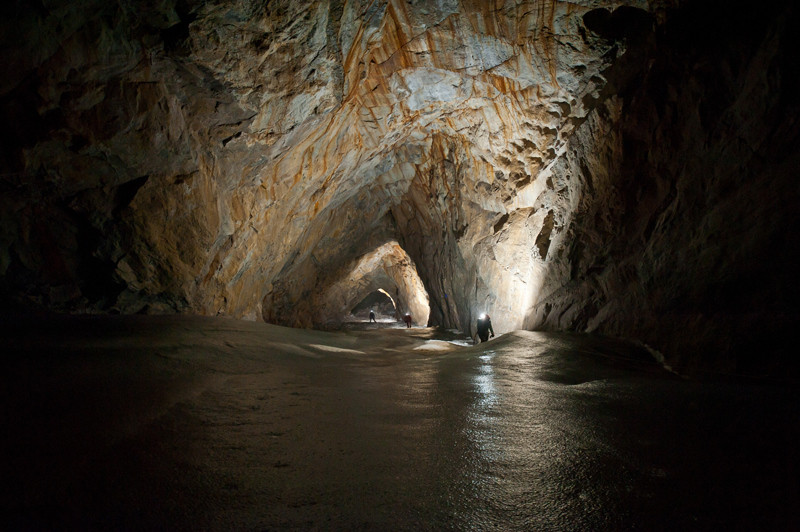 Where if you make one slip then you're going for a wild luge run to the centre of the earth with an unhappy ending.

I'd rather bring one really long rope, then carry several heavier, shorter ropes.

I picked up one of these a while back: Mini Rescue 8 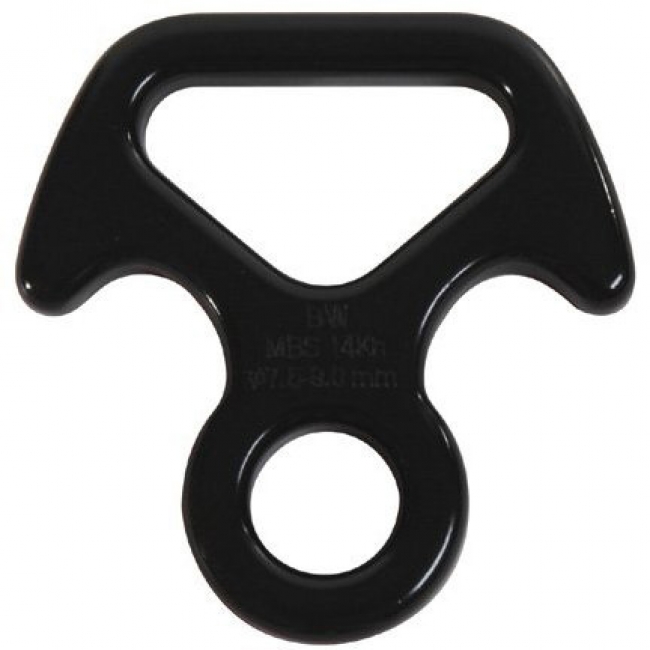 which is made for rappelling on 7.5-9mm ropes. I'm not really familiar with any common situations where you rappel on a 7.5mm rope, but I'm thinking that using one as a fixed line for a non-vertical descent may be one of them.

When is it considered safe to use ropes <⌀9mm for a descent?

It isn't that unusual to use 8mm rope in caving on vertical (at least in Europe) especially in deeper caves with more rope to carry down and of course, back out again.

In the US cavers tend to rig pitches from a single anchor and take care that there are no sharp bits of rock the rope could come in contact with and use rope which is more abrasion-resistant. In Europe we will place intermediate anchors (a "rebelay") on longer pitches which helps prevent rope rub and speeds up abseil and ascent as the pitch is split into sections. Also this means that thinner rope can be used as there should be no chance of abrasion because of rubbing on rock.

Ropes are rigged such that the chances of the rope rubbing anywhere on rock is reduced to nil (or as near as possible) because when prusiking back up ropes, any rope rub will damage the rope and with thinner diameter ropes, the safety factor with respect to damage is much reduced.

I often visit a local old lead mine with a 100 metre shaft which is generally at an angle 45 degrees or steeper with several large steps or platforms cut into the rock at different points. Even though the angle is nowhere near vertical, the shaft is not straight as it wasn't bored by a tunnelling machine but formed partly be natural activity and partly by miners. This means that a single length or rope would rub at various points, both on the lower side of the shaft and also on the upper side.

Cavers do not use Figure of Eight or similar descenders due to the fact that they twist the rope and can be dropped when attaching or detaching to or from the rope. Cavers use either racks (for example) or "bobbin" type descenders (for example) as these do not twist the rope and remain attached to your harness even when loading or unloading the rope.

Although you intend to descend a slope, if it is of any real length other than a few metres, I would treat it as a normal abseil (or rappel) and would be happy to use 8mm rope (bearing in mind my points above). However, below this diameter I would be worried about the ability to absorb any shock in a fall or any possibility of damage from abrasion. Even on a slope, a fall can occur. For example an intermediate belay could give way.

I also agree that 8mm rope is pretty safe. I've done pretty close to straight vertical rappels up to 160ft on it while canyoneering (8mm rope is very common in canyoneering). I'm assuming you've gone on your trip by now, but for anyone else who might be curious, I'd like to address the idea of different descenders. The speed that you travel on the rope has to do with more than just the width of the rope.

As Paul brought up, the figure 8, or rescue 8 as you've posted, tends to twist the rope pretty badly. Another setback to it is that it doesn't allow you to easy adjust friction. There are lots of rappelling devices that allow you to easily add friction as you rappel to help control your rappel better for various situations. The CRITR 2 is currently my personal favorite. However, the SQWUREL and ATS are also great devices that serve the same purpose.

There are tons of other devices aside from these as well. The ability to easily add friction really comes in handy if, for example, you didn't bring the rope and don't know the size, or the rope gets wet and slicker, or the rappels are varying lengths. There's lots of factors that can determine your speed on rope, so it's nice to have some extra control.

Not the answer you're looking for? Browse other questions tagged ropes rappelling caving safety-standards or ask your own question.

49
Is it possible to rappel with only a rope? (No harness, Prusik cord, or other gear)
5
How to rappel on an over-hanging cliff?
13
Why all the different accessory cord diameters?
17
What happens to rappel anchors?
8
How to attach a shackle to vertical square tubes by using a rope?
7
Practical uses for commando/Australian rappel?
7
Is Kamikaze knot safe with ropes of different diameters?
1
Have a couple basic Q's on climbing-line (1 on safely descending/rappelling, another on using multiple lines and/or hardware to achieve "1+1=2"?)
3
Rappel: How do I start rappel from a ledge when using rappel extension
9
Can you Rappel with an Old Climbing Rope?