Dangers of solo hiking (in Ontario)

I have the next week off and I was thinking about exploring some parks in Ontario (e.g: Algonquin). I am prepared for the colder weather and am thinking of doing some trails. Some people I've talked to are asking me not to do this because it might be dangerous. I've only hiked with groups of people and have no experience hiking alone. My question is, are these people just being overly cautious/scared or is solo hiking something that is not recommended (considering the colder weather)?

Traveling solo doesn't necessarily make a hike any riskier, or lessen your chance of injury. What is does do, is increase the response time of rescue workers.

When you're hiking in a group and something happens, then you have immediate help right there to address any critical needs; from putting pressure on a deadly bleed, to carrying your broken body back to civilization. Hiking with groups can also potentially prevent an incident by increasing the odds that someone could lend a hand to help you out of that raging river before it sweeps you over a waterfall, or grabbing you by the shoulder while you're off balance and saving you before you fall off a treacherous cliff. At the very least, while in a group, if you get hurt, there's at least one other person who can run and get you the help you need as soon as possible.

When you're alone, you have to wait until someone notices you've been gone longer than you should have been before they send help, and by then it could be too late.

There was just barely an incident near Portland Oregon this past month, where a girl went hiking without telling anyone, and no one noticed she was missing until her Mom happened to come up from out of state to visit and discovered her daughter's roommate was under the impression the daughter had gone home to visit her parents. After tracking down the most recent GPS info from her phone, they found her abandoned car at a trailhead in a popular hiking area. Weeks later, after a huge search effort–this girl was the daughter of a celebrity piano composer–which covered hundreds of miles of trail, search dogs were able to sniff out some human remains deep in a ravine where no one could have ever spotted them. They were positively identified as the young woman.

Had she informed her roommate about her intensions, the search could have been initiated a lot sooner, rescue workers would have known which trail to search first, and had a much better chance of finding her before she perished.

If you plan on hiking solo, first plan your route, and leave your plan with someone who you will contact when you get back. If you're going out for the weekend, you could let someone at work know what your route and plans are, then if you don't show up at work on Monday, they'll figure out pretty quick that something might have happened and notify the authorities so they can start looking for you.

A good movie that'll ensure you never go anywhere without telling anyone is 127 Hours. It's based on a true story of a solo hiker who got his arm pinched by a chockstone in a slot canyon. After 5 days of being stuck, he finally resorted to cutting his own arm off with a dull pocket knife, and hiked the rest of the way out. There was even a rappel at the end of the canyon, which he rigged and descended with a messy bleeding stump of an arm after going without food and water for days. This guy was pretty hardcore, but unfortunately, most people in these situations share Annie's fate, and die alone in the wilderness.

I've solo'd countless hikes, but I take fewer risks when I'm alone, and always make sure people know where I'm going and when I'll be back. It's perfectly safe to go hiking alone as long as you take proper precautions, be prepared (bring a sharp knife with a bone saw!) and be smart on the trail. If you doubt your abilities, then it's probably best to stick with a group.

The biggest danger in hiking alone is that any sort of injury or illness can very quickly put you in a situation where your life is at risk. anything which immobilises you in the wilderness is potentially quite dangerous.

This is exacerbate in winter where hypothermia can very easily kill you overnight if you are unable to find shelter.

Say you break your ankle. If you are in a group they can put up a tent and get you into sleeping bag and make sure you keep fed and hydrated while other members of the group go off to get help.

There is also the fact that a group can look after each other and help avoid dangerous situations in the first place by cross checking navigation and watching each other for signs of fatigue and hypothermia, dehydration ect.

This isn't to say that hiking alone is a bad idea but you need to be aware of the risks and how to mitigate them.

One very important thing is to let someone trustworthy know your intended route and when you expect to be back, that way if something does go wrong someone will know you are missing and where to look for you.

Also you need to be a lot more aware of potential risks as even a minor mishap can very quickly escalate and also make sure that your skills and equipment are up to the environment and route.

You don't say whether you will be backpacking or sleeping in a campground or motel.

I strongly advise against a backpacking trip as your first experience hiking alone. I'd advise against anyone making a backpacking trip his/her first experience hiking alone even if it were summer and not nearly winter and up north. Too many things can go wrong and you are accustomed to being in a group. Even if you know in theory the answer to each problem posed by @Wigwam, you don't yet know how you will react, alone, in a sticky situation, far from the trailhead.

If you plan on taking day hikes from a campground or motel, then:

Check the weather forecast each morning

No matter what the forecast says, be prepared for a sudden, unexpected change for the worse

Make a plan for each day hike, let a reliable person know what that plan is and stick to it.

Don't go off trail, however tempted you are

Turn around well before you are tired, and in plenty of time to get back before dark

Hiking alone in any season has it's risks; mainly, you lack a key means of getting help should something happen. Just having a phone with you does not guarantee that you will have signal, or that it won't get broken, or that you're being chased by a bear and can't bother even trying to get your phone out of your pocket. With another person with you, that person could go get help, have their own working phone, or at least go tell a ranger that you've been eaten by a bear if they can't distract it without also being eaten.

I don't tend to be an overly paranoid hiker, however I am prone to injuring myself in situations anyone would consider "very safe." Examples: falling hard on both knees while walking on flat trail after having just hiked to the Flatiron in the Superstition Mountains (didn't see a 3" step, was staring at the supermoon); nearly breaking my leg on a stick via tripping on another stick on an otherwise clear, flat trail (sticks are out to get me.)

Late to the party, but the current answers don't really highlight a vital safety point for solo hikers.

The risks of solo hiking have been transformed by the advent of PLBs (Personal Location Beacons). These are handheld units that transmit your rescue request and precise location via satellite to an international Rescue Control Center which will quickly alert your local Search and Rescue service. 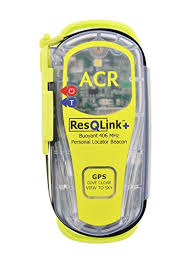 In the past, as a solo walker all you could do was leave your route. If you became incapacitated on a multi-day trip, it might take days before SAR were alerted, and additional time for them to find you. Now the rescue can be alerted literally within minutes and they know exactly where you are.

There is still the risk that you could become totally incapacitated and unable to activate the PLB, so it's still important to leave your route. But for the great majority of incidents a PLB will result in much quicker rescue, with much less inconvenience and risk to the SAR personnel.

If you are walking solo in wild country I feel that a PLB is pretty much a requirement these days, or at least a Garmin inReach (a less reliable but more versatile alternative). If you won't carry one for yourself and your loved ones, consider the SAR personnel who have to risk their lives and give up their time to find you.

Of course the PLB is no substitute for proper experience, planning and equipment as outlined in the other answers. But it is an important element of responsible back-country travel.

11
Cycling in Ontario — do I need to worry about permission to access logging roads?
12
Advice on wild swimming in Ontario, Canada
5
Where can I go backcountry camping in southern Ontario Canada
9
Is listening to music on earphones while hiking solo safe enough?
5
Where to sleep while bike-touring southern Ontario? [x-post from bicycling]
6
The dangers of simul-rappelling
70
Etiquette of playing musical instruments on popular hikes
4
What is a reasonable budget to solo-hike the Continental Divide Trail?
13
What should I consider when planning my first multiple-day hiking trip on hills?
2
Does an Inflatable boat w a 4hp motor need a license in Ontario?