At the crag this weekend I noticed that my climbing partner's carabiner had a great feature: a red line painted such that you know the carabiner isn't locked until the red is hidden. 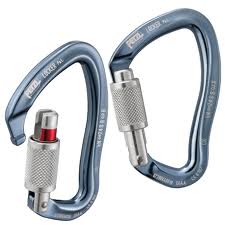 I love this feature. Unfortunately, I already own dozens of carabiners without this wonderful red line.

How can I safely paint a red line onto my carabiners? Red nailpolish? Metal markers? What is permanent? Is there a community standard?

(I would also like to be able to write a date on all my carabiners, so I know how old they are. So this would be doubly useful information.)

The method by which carabiners in any color are coated (either gate or body) is anodizing, which is going to be nearly impossible to sufficiently replicate with anything practical and cost-effective at home. With anodizing, the coating essentially becomes part of the aluminum itself. So anything you put on the gate will wear off relatively quickly and potentially cause the screw-gate to jam up. Nothing you paint on a carabiner or its gate will be permanent. Even the anodizing eventually wears off, unless of course you never use them.

Don't use the "metal markers", aka paint pens. The coat of paint they apply would definitely be too thick for a carabiner gate, and while quite tough, it's also less durable than fingernail polish.

That said, fingernail polish, as others have mentioned, is worth a shot. Carefully put a very light, thin coat on only the gate itself and not any crevices or threads. Before you apply it, make sure you clean everything well so the polish adheres with a green Scotch-brite pad, or similar pad (not the non-scratch kind). Aluminum oxidizes over time and will prevent the fingernail polish from sticking, so if you don't clean it, the polish will flake/rub off rather quickly for sure.

Whatever you do, do a test on just one carabiner first to make sure that the marking has adhered and also that the gate still functions as intended.

For what it's worth, I've never known anyone that has painted/marked the gates of carabiners. Spines are usually where any markings or taping end up. So any community standard that exists would be for identification purposes, either to determine ownership or if a piece has been retired to non-critical purposes (doesn't need to keep you alive).

Here is an example of even hard anodizing wearing off. You can't see it so much in this photo, but the under/inner side is even more worn than the outside. 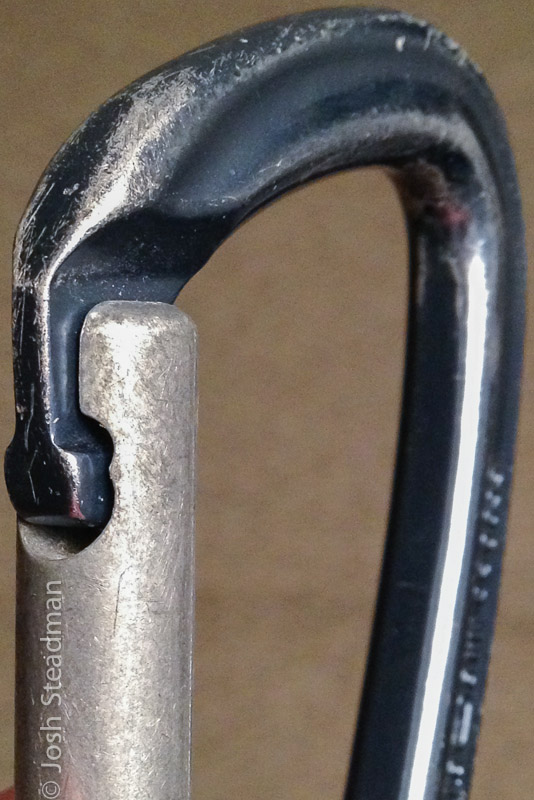 Unfortunately nail polish would probably gunk up the locking mechanism. I wouldn't put nail polish on any moving piece of a carabiner.

You can use nail polish to mark your gear so you know that it's yours (and not your partner's). You may be able to find a multi-color scheme that indicates the carabiner's date, but generally that's not an issue (if it looks worn out, replace it). Carabiners last a long time.

Nail polish is the way to go. Everyone I know, including myself, uses it to identify whose gear is whose.

Not the answer you're looking for? Browse other questions tagged gear rock-climbing improvised-gear carabiners or ask your own question.

24
How to safely mark a rope

8
How do I choose a good quality carabiner?
36
What does it mean to cross load a carabiner?
4
How does a carabiner handle make sense?
3
Using Gri Gri 2's Carabiner with Another Belay Device?
4
A method to retrieve a carabiner
8
Can I re-use a via ferrata carabiner/harness for climbing?
13
Why are carabiners so much weaker if the gate is open?
8
Titanium Carabiner: what is its ideal use case?
13
Specific Chinese carabiner QA?
8
Best uses for a twist-lock carabiner