Should you occasionally use locking biners on pieces of protection when using alpine draws?

Since I mostly climb trad style, I don't use quickdraws for leading outside of the gym. I use alpine quick draws (two biners joined by dyneema slings) which offer benefits of adjustable length, reduced rope drag, and most importantly reduced movement (which reduces the chance a piece of protection wanders out).

There are some downsides to this, however: two of them being that gates of biners on alpine draws are more likely to open (at least with non-wiregate biners), and without the stabilizers found on ordinary quickdraws, the biners are more likely to move around (meaning the gate gets reversed or, even worse, ends up horizontal and a fall will load the gate—the reason I don't use wiregates for alpine draws).

I've heard before that, because of the above, it makes sense to place a draw with a locking biner every so often when you're at a place where you have an extra second to do so (easy spot, maybe a ledge).

What's everyone think of this? Anyone do this? Is it really necessary? Do you use two locking biners, or just one where the rope goes through?

I usually carry 10 single-length slings and 2 doubles, which means I have 24 carabiners just for the draws. That's a lot of biners, which is of course why most people will use all wiregates for this. That's not to say that it's impossible to do otherwise. I imagine that people climbing in the 1970s would have used nylon slings and non-wiregate oval biners, and obviously they managed to lead hard routes despite all that weight.

If you apply that criterion to this question, then I think the answer is that if you have a crucial piece of pro, without which you would be in big trouble, then it could make sense to use lockers at one or both ends of that sling. I don't do it myself, because I don't habitually carry enough lockers to spare for that purpose, but I do have an experienced climbing partner who does this once in a while. Usually I'll see him do it when he places his first piece of pro on a pitch -- the "Jesus nut" that ensures that if you fall, it won't be with a fall factor of 2. Another good example might be one of those run-out slab pitches where you only get one bolt in the middle, and that's all the pro there is.

On a pitch that offers reasonable placements for pro, I would prefer just to place additional pieces rather than trying to beef up one piece by using a locker. Just because you have a locker on it, that doesn't mean that the piece itself is guaranteed to hold.

If you don't have a big pile of lockers with you, another possibility is to use two non-locking biners, opposite and opposed.

First of all, there's no such thing being too safe, do whatever you feel makes you more secure as long as you can do it safely.

As long as you place all of your pro properly, then you're unlikely to need to use lockers as intermediate protection between belays, but, all single gate, non-locking carabiners are susceptible to failing if back clipped, or otherwise improperly placed when you take a normal fall. If you take an abnormal fall however, even properly placed gear can fail.

Grivel has developed a new piece of technology that I think is absolutely brilliant and will soon become the new norm for carabiners (or at least it would if Grivel shared the patent), the security they provide is very reassuring:

As quick and simple to use as a normal carabiner, as safe as a locking carabiner, and still very light weight. I am so impressed with my twin gates, they may be an acquired taste, but I love them. I thought they were going to be difficult to manage at first, but after playing with them I quickly got the hang of the gate action. 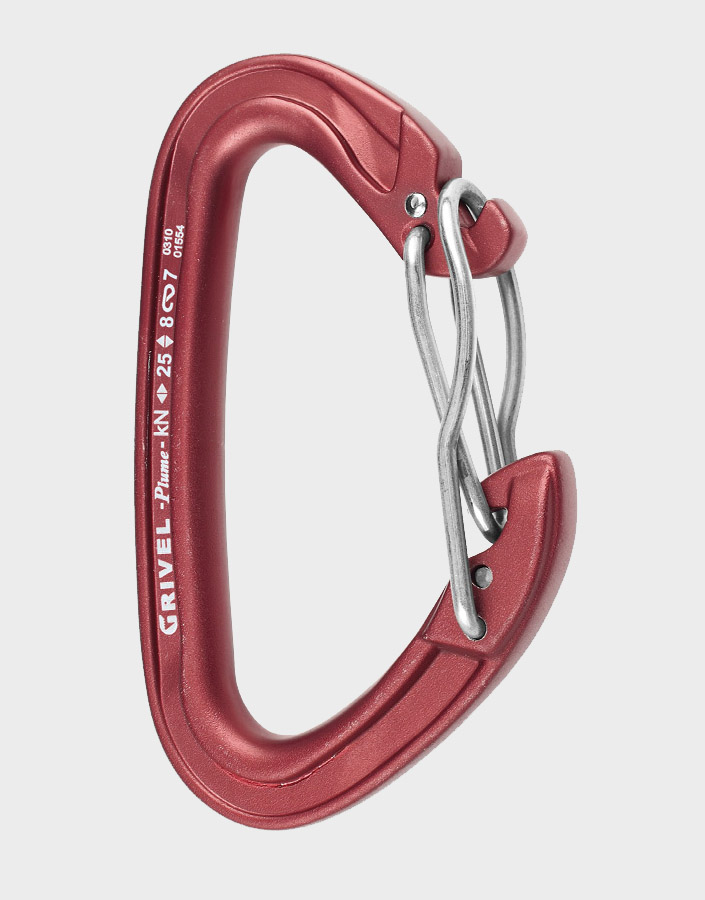 In an alpine environment there are many ways more likely that pro could fail than the gate opening - it not like sport or gym climbing where the anchor can be trusted, therefore, its wise to presume no individual anchor will hold, so if a gate did open and release the rope, the rest of the system will keep you safe. Carrying extra screw gates 'just in case' is not common due to the extra weight and length of time most people spend on alpine routes.

I usually carry one screw gate (for the harness), but for heavily crevassed glacier crossing I will add a second to simplify setting up a rescue system.

In the rare times a situation arises where there's concern about a gate opening, its easy to resolve using two snap carbines with gates opposed. Give this solution works every where a screw gate works, and is more versatile in that you have two biners when you need two, it is almost always better to add another biner to your rack than swap one for a locking gate.

20
Using a Girth Hitch in Alpine Draws
16
Placing protection efficiently when leading trad?
16
What's the minimum diameter cord to use when climbing a rope using a prusik
4
Shortening a shoulder-length sling to half-length?
13
When should you use gear to climb a tree?
10
When should you remove old pitons?
3
Using Gri Gri 2's Carabiner with Another Belay Device?
29
What should one do when climbing if someone above you yells ROCK?
7
Which option should you use for a multi-pitch climbing anchor after traverse?
3
Use of a personal anchor system to rappel (abseil) off a cliff with anchors by the edge and at foot level